What exactly is rolling resistance?

Rolling resistance is the energy that is lost when the tire is rolling. The main reason for the loss of energy is the constant deformation of the tire.

Each bicycle tire should, of course, roll as easily as possible. In contrast to a car a cyclist has only (very limited) physical power which he wants to apply as efficiently as possible.

In addition to the rolling resistance, there are also other resistances that must be overcome when riding a bicycle:

Acceleration energy is also expended. For instance, the weight of the wheels is of great importance when this mass has to be brought up to rotation.

When riding uphill, the main resistance force to be overcome is the gradient resistance (grade resistance).

In addition to these, there are other friction resistances in the chain and in other rotating parts. Yet in a well-serviced bicycle, these represent a very minor part of the total resistance. 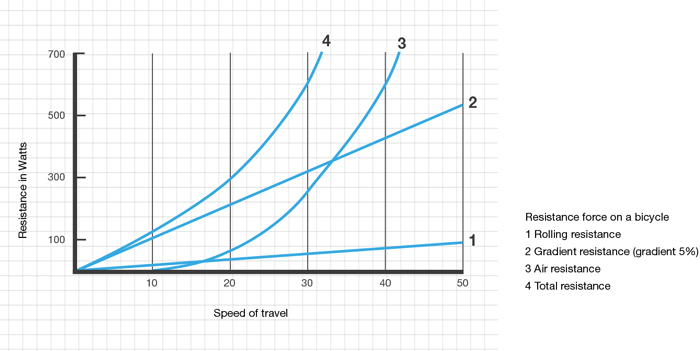 Tire pressure, tire diameter, tire width, tire construction, tire tread and other factors all have an effect on rolling resistance.

On a completely smooth surface the following applies: The higher the inflation pressure, the inferior the tire deformation and thus rolling resistance.

Off road it is exactly the reverse: The lower the inflation pressure, the lower the rolling resistance. This applies equally on hard gravel roads and soft forest tracks. Explanation: A tire with low inflation pressure can adapt better to a rugged surface. It sinks into the ground less and the whole rotational mass is held back much less by the uneven surface.

Tires with a smaller diameter have a higher rolling resistance with the same inflation pressure, because tire deformation is proportionally greater. The tire is flattened more and is “less round”.

Obviously, tire construction also has an effect on rolling resistance. By using less material, less material can be deformed. And the more flexible the material is, such as the rubber compound, the less energy is lost through deformation.

Why do wide tires roll better than narrower tires?

The answer to this question lies in tire deflection. Each tire is flattened a little under load. This creates a flat contact area.

The flattened area can be considered detrimental to tire rotation. Because of the longer flattened area of the narrow tire, the wheel loses more of its “roundness” and produces more deformation during the rotation. In a wide tire, the flattened area is shorter in length and does not have so much effect on the rolling direction. The tire stays “rounder” and therefore it rolls better.

Why do professional road racers use narrow tires?

In addition to this, narrow tires have an advantage over wider tires at higher speeds, as they provide less air resistance.

Above all, a bicycle with narrow tires is much easier to accelerate, because the rotating mass of the wheels is lower and the bicycle is much more agile. The importance of this aspect becomes clear very quickly, when you ride in a fast group
of cyclists and when you have to accelerate rapidly from 20 to 40 km/h after a sharp turn in order to keep up with the others.

But at a constant speed of around 20 km/h, the ride is better with wider tires. In practice, the energy saving is even greater than in theory, as the elasticity of the tires absorbs road shocks, which would otherwise be transferred to the rider and thus saves energy.