Addix – the new generation of compounds for MTBs

Schwalbe is launching its 13 MTB tyres in the Evo line with new compounds developed from scratch. The rubber compounds go by the name of Addix which solves the typical trade-off between grip, rolling resistance and wear across a much wider range than ever before.

Improving grip and rolling resistance, durability and damping are the typical conflicting aims of tyre technology. Enhancement of one property always comes at the expense of another. A single compound can never be the answer to everything. So ultimately it’s all about making intelligent compromises aimed at edging that little bit closer to perfection.

To develop a completely new generation of rubber compounds, Schwalbe’s technicians didn’t leave a single stone unturned, not with the formula, nor with the process or the mixing technology. 30 employees led by head developer Markus Hachmeyer have been working on the new formulas and processes since 2015.

Every rubber compound is made up of natural and synthetic rubbers – along with many other solid and liquid ingredients, including carbon blacks, silica, silanes, oils, sulphur, anti-oxidants. Markus Hachmeyer says, “The quality of these raw materials co-determines whether a tyre will be outstanding or just mediocre. And there are countless options for selecting, combining and measuring them. So a good formulation requires highly specialised expertise, high-quality raw materials and extensive testing – it goes without saying that the final recipe is top secret.”

The formulas are only one part of the equation. The mixing process is the other. Here the margin for error is tiny. The difference between hitting a home run and striking out is minuscule. The interdependence between the parameters which define the physical and chemical process is extremely complex and even changing only one of the parameters can produce an entirely different result. So to achieve success, there are three things that have to interact perfectly: the formulas, the process and the technical equipment – and all three are trade secrets, of course.

“The most sophisticated mixing process of the bicycle tyre industry”

The Addix compounds offer a new level of quality in terms of all parameters. Among other things, Schwalbe uses a mixing technology that originates from the car tyre industry. Markus Hachmeyer explains, “We now have hardware throughout our factory that we are using to implement the most advanced and precise mixing process in the bicycle tyre industry. Entirely new horizons are opening up to us because we can vary all the parameters indefinitely. It’s this high-end mixing technology, controlled by our specifications, that actually makes completely new compound properties possible. So with ADDIX we’re achieving a whole new level of performance and quality.

Never before have we taken such an ambitious step with the compound. It’s obvious that with ADDIX we’ve become even better. To mention but two striking advances: in terms of durability, our tyres have become much more impressive across the board, and the low-temperature properties are now excellent, and not only in the soft compounds.”

Schwalbe has created four Addix compounds to meet the specific requirements of cross country, all mountain, trail, enduro and downhill:

Does the new compound really make such a huge difference? “Absolutely!” says Markus Hachmeyer. “All the tests in the lab and in the field demonstrate that, in the direct parameters as well as in the complex properties, Addix performs considerably better than any other compound before it.” 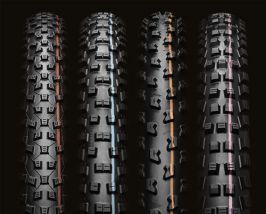 Red for Speed, blue for Speedgrip, orange for Soft, purple for Ultrasoft: the four Addix compounds will shake up the MTB world. Schwalbe varied the raw materials, dosages and mixing processes to do this. Download (jpg, 3.9 MiB) 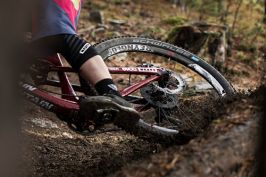